Who Will Go: Into the Son Tay POW Camp

A Review by Bob Seals
November 21, 2020 marked the fiftieth anniversary of Operation IVORY COAST, the joint special operations mission to liberate American prisoners of war (POWs) held at Son Tay, northwest of Hanoi, the capital of North Vietnam. The rescue effort, launched from air bases in Thailand, was a “mission of mercy,” according to President Richard M. Nixon. The raid was also an attempt to illuminate the inhumane treatment and abuse of the POWs by their communist captors. The ad hoc Joint Contingency Task Group (JCTG) included six helicopters, handpicked U.S. Air Force airmen, and a ground assault element of fifty-six U.S. Army Special Forces (SF) soldiers, largely from the 6th and 7th SF Groups at Fort Bragg, North Carolina.

One of the fifty-six SF soldiers on the mission was Sergeant (SGT) Terry L. Buckler, Company D, 7th SF Group. The recent book Who Will Go, Into the Son Tay POW Camp, is Buckler’s first-person account of his life, the historic raid, and the dramatic twenty-seven minutes on the ground decades ago. The youngest Son Tay Raider at age twenty, with only a year and half time in service, Buckler seemed an unlikely choice for such a mission. However, his commitment, persistence and soldierly skills caught the attention of Colonel Arthur D. “Bull” Simmons. SGT Buckler was selected and served as the Radio Telephone Operator (RTO) for the commander of the Redwine Security Group, Captain Daniel D. Turner, Company A, 6th SF Group. 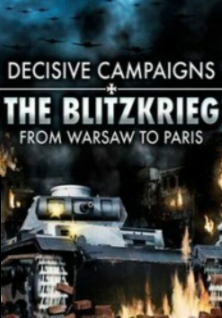 Decisive Campaigns: The Blitzkrieg From Warsaw to Paris

A Review by Brian Williams
Decisive Campaigns: The Blitzkrieg From Warsaw to Paris is the first in the series of "Decisive Campaigns" by Victor Reijkersz (he is also known for is earlier game Advanced Tactics).

The Decisive Campaigns series is the classic hex and counter, turned-based strategy game that most wargamers are accustomed to. It was released to Steam back in August of 2010 (and the Matrix Games site earlier), but I finally dove into into it since it was on sale for under $10. The other three games in the series: "The Blitzkreig", "Case Blue" and "Barbarossa" are all on sale right now in anticipation of the newly released "Decisive Campaigns: Ardennes Offensive" earlier this month.

The Union Cavalry and the Chickamauga Campaign

A Review by Walter E. Pittman
An area of relative neglect among the overly numerous Civil War studies has been the Western Theater and, in particular, Union cavalry operations there. Dennis W. Belcher undertook to correct this neglect in a series of books on the cavalry arm of the Army of the Cumberland: General David A. Stanley (2014), The Cavalry of the Army of the Cumberland (2016), The Cavalries at Stone’s River (2017), and now The Union Cavalry and the Chickamauga Campaign (2018). Earlier general histories of the Chickamauga Campaign had treated the role of Union Cavalry in the campaign superficially as only incidental to the battle: Thomas L. Connelley, Autumn of Glory (1971), Glenn Tucker, Chickamauga (1984), Stephen Woodworth, Six Armies in Tennessee (1998), Peter Cozzens, This Terrible Sound (1992) and others.

The History of Toy Soldiers

A Review by Brian Williams
Toiati's writing style is light-hearted and fun. He has meticulously researched the history of toy soldiers, and it's such a great pleasure to read and look at the photographs of the various toy soldiers and they progress through history. The chapters vary in subject matter, but are organized in chronological order, starting with early history and moving to tin, paper, half-round, aluminum, hollow-cast, and eventually to plastic.

A Review by Brian Williams
“Last Post Over the River Kwai” tells the story of the officers and men of the 2nd Battalion East Surreys during World War II. The Battalion was stationed in Shanghai in the early 1940's and later deployed to Malaya and Singapore. After the surrender of Singapore they found themselves prisoners of war to the Japanese. What followed was over three years of barbarity of unimaginable description at the hands of the Japanese.

A Review by Brian Williams
“Last Post Over the River Kwai” tells the story of the officers and men of the 2nd Battalion East Surreys during World War II. The Battalion was stationed in Shanghai in the early 1940's and later deployed to Malaya and Singapore. After the surrender of Singapore they found themselves prisoners of war to the Japanese. What followed was over three years of barbarity of unimaginable description at the hands of the Japanese.

The History Behind Game of Thrones: The North Remembers

A Review by Brian Williams
The History Behind Game of Thrones: The North Remembers by David C. Weinczok is perhaps one of the most interesting books I've read this year. I'm a Game of Thrones fan who has watched the entire series twice and some seasons three times so I was super excited to read this book not really knowing exactly which angle it would take. I came away deeply admiring the series/books even more and having a great appreciation for the history of the British Isles and Scotland in particular.

The Napoleonic Wars: As Illustrated by J.J. Jenkins

A Review by Brian Williams
“The Napoleonic Wars” as Illustrated by J.J. Jenkins was originally published as “Martial Achievements of Great Britain and Her Allies From 1799 to 1815”. It is self-described as “Pure British propaganda but is overshadowed by the rarity of the art work”. It includes fifty-four stunning color plates of battlefield depictions including a portrait of Wellington and his coat of arms.

A Review by Brian Williams
The battle of Stalingrad has always been a fascinating battle for me to study. The German Army was still steam-rolling over the steppes of the Ukraine and seemingly unstoppable. But, unbeknownst to them, they had overstretched themselves to their ultimate breaking point. The rationale was if only they could take this last city on the western bank of the Volga, they could work on solidifying their front and move north and east. But, that determination cost the destruction of the German 6th Army, the surrounding Axis allied armies and resulted in the ultimate retreat of the entire German army.

Stormtrooper on the Eastern Front

A Review by Brian Williams
“StormTrooper on the Eastern Front: Fighting with Hitler's Latvian SS” tells the story of Latvian Mintauts Blosfelds, who was given the choice of either joining service with the SS or forced into a labour camp. He reluctantly chose the enlist with the newly-formed Lavtian Legion, which was part of the Waffen-SS.

A Review by LtCol Rich Beil USMC (Ret.)
This book is written for a wide audience that knows little about World War I, Gallipoli, or history at all. Reading the reviews on Amazon.com, one is led to believe that it represents new scholarship. While the first person accounts provide an interesting perspective, for those who have studied World War I in general, and Gallipoli in particular, it provides little that is new.